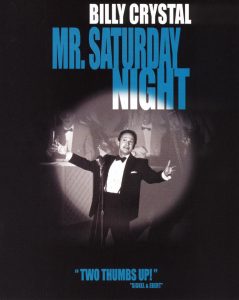 A blast from the past that is now a Broadway hit show!

Stand-up comedian Buddy Young Jr. became a television star with the help of his brother and manager, Stan. Through a series of flashbacks, the brothers are seen during childhood entertaining their family in the living room.

Buddy starts his career as a comic in the Catskills and as his fame grows, so does his ego. He hits the big time with his own Saturday night television show but despite the warnings of his brother, Buddy uses offensive material on the air, costing him his show and causing his career to suffer.

Buddy’s hilarious backstage climb to the middle is studded with witty one-liners but he gives in to his own self-destructive nature, continuing to hurt his relationships with his family.

Details:
Sunday, July 24 @ 7:30 PM
Outside Summer Film Series Under The Stars
Bring your folding chair and a jacket
$5 per person — Includes Concessions
$1 raffle tickets will be on sale for your chance to win a $25 gift card
RSVP to cbsfilmseries@gmail.com or (661) 254-2411